Congress of the Spanish Society of Medicosurgical Laser. Marbella 2004 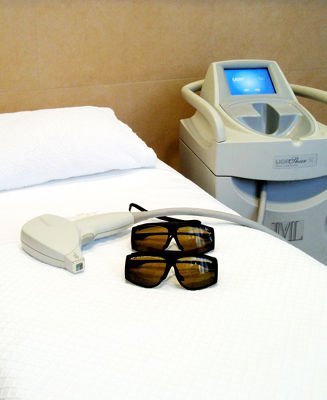 The basic objective of the treatment is to irreversibly damage cells that generate hair. The publication of the results of the studies performed by Rebecca J. Morris et al. in Nature Biotechnology 22,411-417 (2004), have allowed us to determine the genetic profile of stem cells in the hair follicle. These studies showed the existence of several receptors that represent potential tools to treat hair loss and order hair and ski disorders.

Based on the above, we can conclude, in line with other authors, that:

Follicular stem cells do not have a significant amount of pigment. We must reach a sufficient level of thermal damage in a target that is not uniformly pigmented by transmitting diffuse heat from the “heater” (absorbing pigmented area).

Our management protocol can be summarised as follows:

We must take into account “the thermal relaxation time of the heater”, plus the time required by heat to diffuse from the hair stem (heater) to the most external part of the hair follicle, which is where the target is located.

Because of this, the “thermal damage time” for a target other than the heater is “thermal damage time” > “thermal relaxation time”. This justifies the contrasted efficacy of a long pulse, delivering more energy at each pulse, as the dermis is more protected. This also results in less discomfort for the patient during the treatment session.

The extended theory of Selective Phothermolysis calculates the ideal wave length for a “target” at a distance from the “heater”, considering the diffusion time of heat from the “heater” to the most external part of the “target”.

It is the time of irreversible thermal damage for the most external part of the target.

Currently available systems do not usually provide such a high length wave. Some, such as de Diode LightSheer, that emits at 400 ms have been updated. In general, we try to employ with systems that emit longer pulses (body photoepilation) and at high fluences, trying to use short pulse lasers (gentle 3 ms laser) in miniaturised residual short hair.

This reasoning explains why there was no improvement in the results, such as in the male’s back at high fluence with short pulses, due probably to the release of substances resulting from the direct combustion of hair (with release of steam from water, a crashed chromophore or bubbles) that breaks the interface and hinder the transmission of heat from “target” from the “heater”.

For a significantly shorter pulse (30 ms), at equal fluence, there is more hair combustion and release of products from the ablation of the hair follicle. In this case, damage to the hair follicle would decrease alongside the decrease in pulse length, and for very short pulses, damage could be limited to the actual hair shaft.

The differences between theory and practice for pulses over a 400 ms length can be explained by the scanty irradiance capacity of currently available systems that are not capable of delivering 100W/cm2, which is required to heat the heater to nearly 100°C.

For a fluence of 35 Jules/cm2, with 800nm diode laser and 9x9 spot, irradiance (which is fluence/time) is as follows:

3. With respect to fluence:

Energy must be limited in order to prevent loss of heat absorption in the pigmented area (100°C), but must be high enough to heat the area above an effective temperature that will cause thermal damage in the “target”.

In case the heater reaches a temperature higher than what it can absorb, direct ablation of the heater will occur, with release of combustion substances that make clean diffusion of heat difficult towards the “target”.

Given that stem cells in the hair follicle survive past the telogen phase at the height of the bulge, the time interval between sessions does not necessarily have to follow hair phases. Whenever there is a hair shaft, we can heat the bulge and achieve permanent epilation.

This phenomena has been observed by many authors. We published a study showing that in one high efficacy session, we could remove a higher percentage of hair in total than the theoretical total figure in the anagen phase in hair in the female armpit. We propose to maintain a time interval between sessions so there is sufficient hair density and during these breaks we suggest using a razor blade.

It is highly advisable to discuss with the patient what can be expected from treatment with regard to permanent hair removal. This should be done depending on the area to be treated. To provide the patient with a reliable outcome, we need to take into account those body areas that carry primordial hair follicles that can or cannot become activated over time (androgen-dependent areas). Consequently, these areas are potentially capable of growing new hair even after having been thoroughly treated with a laser.

This is the case of facial hair in females and other areas that are hormone-dependent such as areola, cleavage, alba line and lumbar region. In men, hair growth on the back and trunk starts in adolescence and does not stop until maturity is reached. The testosterone concentration in a 55 year old male is 15% of that of a 25 year old male.

Obviously, this influences the cessation of the stimulation for the development of body hair. Men start to show hair growth in the tragus (the tragus is the small piece of thick cartilage that projects immediately in front of the ear canal) after the age of 40 and hair does not stop growing in larger and larger amounts during the rest of their lives.

We need to explain that in these cases, laser does not fail. What happens is that they can only eliminate the hairs that are present at the time of the session and when new hairs grow on the site, retreatment will be necessary.

Logically, any patient whose wish is to eliminate very finely pigmented or thin hair, should be advised not to undergo laser epilation.

Some studies relating to photodynamic therapies using photosensitisers at an spectrum of 630-635 nm, Dierixcks 2002, have been published. Systems have been developed that combine the emission of radiofrequency and laser together. These systems aim to optimise the results in the treatment of mildly pigmented and small calibre hair follicles.

Basically, the objective is to improve skin impedance. Impedance is the inverse function of conductivity and also provides information on tissue temperature, as temperature changes modify impedance. Thus, by measuring the temperature we will determine the impedance.

The system that we have been using at IML is the Aurora system, from Syneron.

This system is equipped with an external impedance sensor that determines the temperature of the ski surface. Through the emission of a beam of non coherent light, the objective is to heat the hair follicles, accepting the fact that the temperature reached does not cause thermal damage.

Nevertheless, such relative increase in temperature does modify the impedance of the follicle, resulting in increased flow of radiofrequency that is delivered by the system after the light emission. Measurement of impedance on the skin surface determines the level of safety of the system. Skin heating would decrease impedance, which in turn would be detected by the system.

The increase in flow density of radiofrequency waves would cause the necessary damage. This methodology is rather attractive for the clinician. We have tried the Aurora laser from Syneron for several months in hundreds of patient and although it has shown to be a good system, we have observed no advantages in “impossible hair” and works as the rest of systems in standard indication hair. The route of complementary technologies to lasers is open. It is almost certain that new optimised prototypes will appear in the market in the next few years.

The future awaits for us with technological and scientific improvements, which we hope to be able to continue to share with our colleagues from the Spanish Society of Medical / Surgical Laser.