It is more and more frequent to have decorative tattoos applied. However the need to eliminate them for social or professional reasons is also increasing. Formerly, tattoos were removed using aggressive methods such as electrocoagulation or dermabrasion, non-specific procedures that removed the tattooed skin causing subsequent scarring. Currently, laser technology is used to efficiently eliminate tattoos without damaging the surrounding skin.

In order to establish treatment, a personalised evaluation of each patient should be performed. The colour, type of tattoo and its location on the body are variables that condition the results: 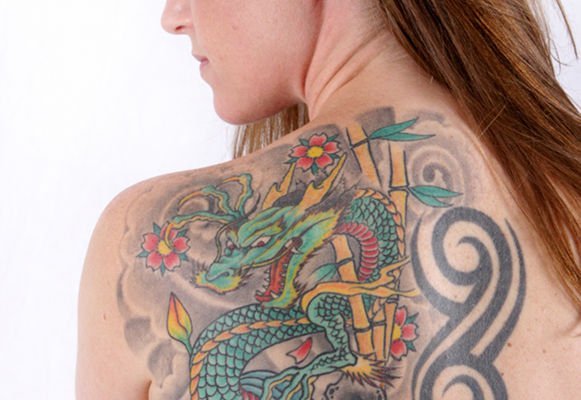 The areas in which the skin is thinner and the ink is closer to the surface of the skin are body locations which need a less number of sessions:

In areas such as legs, arms and back, the tattoo ink is deeper and the skin is thicker, requiring more sessions.

Application on the area of an anaesthetic cream is recommended an hour before treatment. The Dermatologist will adjust the parameters of the type of laser selected and will start to discharge on the tattoo. The laser acts by fractioning the pigment particles and chemically altering them, making them less visible to the human eye. These particles are reabsorbed by our organism through cells (macrophages) and subsequently eliminated through lymphatic drainage.

Once the session is concluded, which is in general fast thanks to the laser that emits 10Hz (that is, 10 impacts per second), an antibiotic ointment is applied and the area covered with an occlusive dressing. Cures should be performed daily until the skin is recovered from the lesion. The appearance of slight inflammation, bruising and on occasion, small blisters caused by the explosion of pigment under the skin are all normal manifestations.

After the first week, the treated area can be uncovered, although it should be protected from the sun and a cream containing musk rose oil should be applied. The following session should be carried out at least a month and a half after the first one, so that the organism can regenerate the skin and the lymph system can gather the pigment fragmented in the previous session.